Southern West Virginia is known worldwide for its whitewater rivers and rafting. There are 4 unique sections of river you can run, with trips suitable for everyone from kids and families to thrillseekers.

Every amazing adventure takes you through a series of whitewater rapids, each with its own challenges.

Here’s our guide to some of the most interesting rapids along the rivers in Southern West Virginia— not just the most exciting, but also the most underrated, and those with unique history, stories and local lore you may have missed your last rafting trip.

Let’s start with some whitewater rapids 101: RAFTING- Challenge yourself to paddle as a team with a crew of 8. Request a smaller boat for a wilder ride! 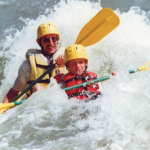 KAYAKING/DUCKYING- Paddle solo in a kayak, or the kids can captain their own sturdy duckie. SUP- Stand-up paddleboard the smooth lake waters, or try out some easy rapids. OTHER- Take a jetboat or other ride through the rapids.

How will you ride the rapids? Here’s where to get the gear & find experienced guides:

Keep an eye out for the eddys, too. These are calm pools of water, usually downstream of an obstacle. If you fall out, your guide will tell you to swim to these safe spots to await pickup.

There’s also a such thing as Class VI, but those rapids are too dangerous to run. Some classifications can change depending on how high the water is.

Now that you know the ropes, let’s explore some of the rapids you can paddle through on each river section.

Use the map and tabs below to explore the rapids on each river section:

The New River may be one of the world’s oldest, digging into the sandstone cliffsides to create “The Grand Canyon of the East.” It is the tamer of the Southern West Virginia whitewater rivers, and the Upper New is the calmest stretch. Full of history, scenery and small rolling rapids, it’s a great ride for young kids. In fact, they can paddle their own boat with an inflatable kayak called a duckie.

This is the quintessential West Virginia whitewater rafting run. It’s still fit for families, but it swells with much bigger waves than its upstream sibling. Prepare to be splashed, and maybe even for a short swim!

This legendary section of river is one of the top whitewater runs in the world— challenging and remote with huge, one-of-a-kind rapids. This “Best of the East” is only flowing a few days a year in the fall, so you have to catch it in September or October. If you’ve never rafted before, you’ll probably want to take a practice run on the Lower New before taking on the Upper Gauley.

As any raft guide will tell you, the Lower Gauley doesn’t get enough respect, only because it’s overshadowed by the legendary status of the Upper section. But it’s every bit as world-class, with plenty of challenging waves and big hits, not to mention the same pristine, remote scenery that has earned the Gauley River area the prestigious distinction of a National Park.