The true strength behind the headlines

McDowell County was once the largest coal-producing county in the nation.

In the 1940s, McDowell Street in downtown Welch was bursting with life. Shiny Packards and rumbling streetrods crawled between strips of brick buildings. Below flashy marquees, shoppers and moviegoers crowded the sidewalks. Bramwell, a town in neighboring Mercer County, had the largest number of millionaires per capita in the entire nation. Its pharmacy was one of only 3 in the nation to stock the upscale Chanel No. 5 perfume. In crevices of the crinkling mountain landscape, company towns filled with tiny, uniform houses were practically sprouting up overnight.

In the 1950s, the heyday topped out at nearly 100,000 people.  After the boom, the bust came quickly and without warning. 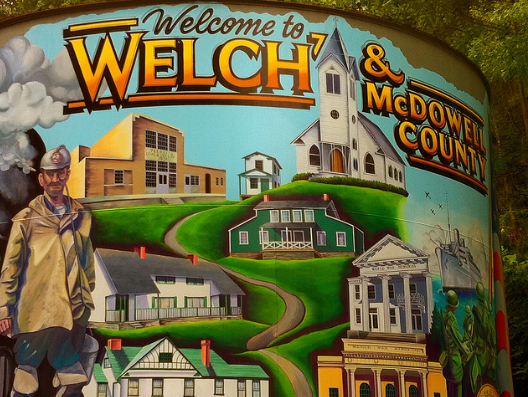 By the ’60s, McDowell had drawn the attention of then-presidential hopeful John F. Kennedy, who stood among mountaineers and spoke of boarded up houses and closed down coal camps where miners were left without jobs. U.S. Steel, the largest steel plant in the world, closed in the 80s, leaving a town named Gary with an unemployment rate of 90%. Gary’s street lamps were snuffed out because they couldn’t afford to pay the electric bill. In 2016, even the retail behemoth Wal-Mart is shuttering its doors in Kimball.

Today, it seems people are drawn to a sensationalized version of McDowell County. A quick Google search brings up news outlets from all across the nation. The Associated Press, The Washington Post, and even The New York Times have examined the area through a looking glass, like a broken scene in a snow globe.

“Much of the attention is very backwards,” said Jake Lynch, who is working with Turn McDowell Around, a community-led effort aimed at revamping the area. The most recent meeting, which was only the 3rd, drew about 70 people.

While headlines tell a story of a place that was long ago robbed of its most precious resource, another of its assets has survived: its people.

Linda McKinney is one of those people. She and her family run Five Loaves and Two Fishes, a food bank in Kimball that served 3,753 families (consisting of 10,263 individuals) in 2015. Working entirely for free, McKinney is face-to-face with the poverty of McDowell every day. She’s no stranger to the havoc of the area’s economy (her grandfather, dad and husband were all coal miners), but she maintains a contagious upbeat attitude.

“We choose to focus on the positive. The best thing we have going for us are the people,” she said. “We are a community, and we do attempt to take care of one another.

We raised our children here. We’ve had a good life here. We have good people here, our mountains are beautiful, and I still see it as I was when I was a child,” she said.

Those mountains keep the sense of community strong in McDowell, a melting pot rooted in the coal boom.

“There was a large influx of immigrants to the area in the boom of the coal mining era,” said Richard Bullins, an employee of the Coal Heritage Trail, which runs through the county. “There’s a strong family tie [in McDowell] and a sense of pride amongst a lot of those families.”

Bullins, who spends his days talking with visitors at the Bramwell Train Depot, touts the Coal Heritage Trail as a great historical journey. The trail winds through 187 rugged miles of scenic industrial heritage, marked by sprawling coal camps, company stores and railroad yards. You’ll pass by The Kimball World War I Memorial, the first memorial built in the U.S. to honor African-American veterans of war. Today, it’s the only such memorial remaining.

The mountains also serve as a canvas for the colossal spider web of ATV trails in Southern West Virginia known as the Hatfield-McCoy Trail System. A leg of the legendary system heads in Ashland, another once-booming coal town. Now, it’s bustling with ATV riders venturing through hundreds of acres of beautiful hardwood forest.

Despite how the media has portrayed it, the rolling green mountains that decorate McDowell County— and the beautiful people who call those mountains home—  will always find a way to prevail.