Thanks to an embarrassment of other recreational riches, baseball probably isn’t the first sport one thinks of when one thinks of Southern West Virginia. Indeed, many of the cities people come to the Mountain State to get away from for a little while have major league teams of their own, making our national pastime less of a priority for visitors. It’s worth reconsidering that idea, however, because while baseball may not be played at its highest level in the Mountain State, it is played at its purest and most enjoyable.

Three minor league baseball teams — Beckley’s West Virginia Miners of the Prospect League and the Princeton Rays and Bluefield Blue Jays of the Appalachian League — call Southern West Virginia home. A game featuring any one of those teams will provide a family with an evening of inexpensive and action-packed entertainment. Because they are separated by fewer than 60 miles, however, it’s not hard at all to take in contests featuring all three teams in the space of a single weekend. That’s what I did recently, and it was one of the most enjoyable baseball experiences of my life. Day one of my trip featured a matchup between the Bristol Pirates and the Princeton Rays. Before heading to H.P. Hunnicut Field in Princeton, however, I filled up with a nice dinner and a pint of beer at The RailYard in Bluefield, getting myself a Back in Black steak salad and a Big Timber blonde ale from Big Timber Brewing in Elkins. It was my first visit to The RailYard, but given the tough choices I had to make due to the wide selection of both food and drink, it won’t be my last. After my meal and some pleasant conversation with some fellow patrons, it was off to the ballpark. 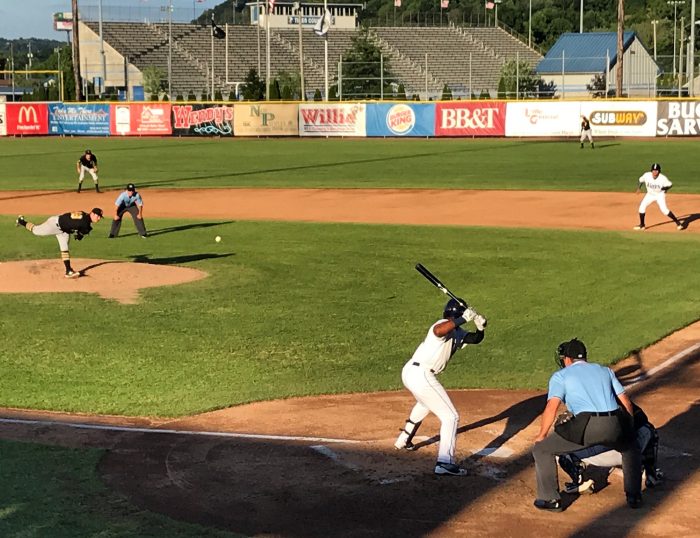 Some people say kids don’t like baseball as much as they used to, but those people haven’t been to Hunnicut Field in Princeton. While parents are wise to keep their kids close by at a major league park in a big city, Hunnicut is a safe, friendly and inviting environment, the likes of which it sometimes seems doesn’t exist any longer. It’s the kind of place where mom and dad can say “check in with us every couple of innings” while the kids chase down foul balls and check out the game from any number of angles around the park, hanging out with their friends or maybe meeting new ones. On this night nearly every child I saw snagged a souvenir ball and ate their fill of popcorn and hot dogs, all available for much lower prices than you find in the big leagues. Indeed, both the ticket and the concessions are cheaper than you’ll find at your local multiplex, and you get a great ballgame and a beautiful West Virginia summer sunset just beyond the third base line thrown in with the deal.

As for the game, Princeton beat Bristol 4-1. A special treat for me was getting to see a shortstop by the name of Wander Franco, who the Rays’ parent club in Tampa Bay just signed for a hefty sum out of the Dominican Republic, where he made a name for himself as the top international prospect in all of baseball. On this night Franco only got one hit, but he’ll no doubt be getting many in the majors one day soon and I’ll be able to say I saw him when.

I had plenty of time before Day two’s game in Beckley for some sight-seeing. I grew up in Beckley but I don’t get back nearly enough, so I visited some of my favorite spots, including Little Beaver State Park, Grandview, Thurmond and the New River Gorge, followed by a stop in Fayetteville where I parked and did a little impromptu hiking on Long Point Trail (always take your hiking boots along with you when you’re in Southern West Virginia). After my hike I grabbed a shower and then grabbed a wonderful meal at Pasquale’s. Pasquale’s, a Beckley institution, has some of the best Italian food not just in Beckley, but anywhere. It also holds a special place in my heart and in the memories from my youth, as I took not one, but two prom dates there back in the day (different years, of course!). While I knew there would be some good ballpark snacks in my near future, there was no way I wasn’t going to make room for some veal marsala and a cannoli for desert. Pasquale’s hasn’t changed a bit since I was last there and I couldn’t be happier about it. The West Virginia Miners play in a collegiate summer league — the Prospect League — in which college baseball players, fresh out of school for the summer, hone their skills with wood bats for the first time. The Miners’ existence in Beckley is due to the Epling Family. Owner Doug Epling founded the team and built the stadium, which is named after his wife, Linda K. Epling. It’s an all-hands-on-deck affair for this baseball-loving family. One son, Tim, manages the team and recruits the players. Another son, Gary, is one of Tim’s coaches. Another son Matt, is in charge of in-game promotions, marketing and, on the night I was there, was running the concession stand with his wife and young daughter. Doug and Linda’s grandson Kendrick, a freshman at WVU Tech, is the team’s first baseman. A Miners game at Epling Stadium is like being invited into someone’s home for a few hours, at least if their home features some of the best amateur baseball players in the country. On this night they were pretty good, beating the Kokomo Jackrabbits, 6-3. Day three of my tour took me to Bluefield, and let me tell you, you must get yourself to Bowen Field at Peters Park  for a Bluefield Blue Jays game. Before you do, make sure you stop at a Taste of Memphis in Princeton for the best ribs you’ll find anywhere, Memphis included. Then head down to Bowen Field.

I’ve been to over 25 major league stadiums and a dozen or two minor league parks and I can say with confidence that there is not a lovelier place to take in a ballgame than Bowen Field. The park is right in town but it sits against the backdrop of a tree-covered hill and with Beaverpond Creek meandering just beyond the outfield fence, making one feel as if they’ve escaped everything except for the enjoyment of the ballgame in front of them. It’s not just the beautiful, bucolic setting that makes Bowen Field special, though: there is no park I’ve been to with seats closer to the action than Bowen Field, giving every fan a commanding view of the action. Making a Blue Jays game truly special, however, are those fans themselves. Appalachian League baseball has been played in Bluefield for nearly 100 years, and Bluefield fans are a knowledgable and loyal group of people. The Blue Jays have a dedicated booster club which supports the team through its fandom and its players though catered, family-style dinners and other social events over the course of the season. Most minor league players will move on quickly after playing in Bluefield for a while, but while they are there, they’re made to feel at home. As on the previous two nights of my tour, the home team won, with the Blue Jays walloping the visiting Burlington Royals, 12-2. As was the case in Princeton, I had the pleasure of seeing a cant-miss prospect in the form of third baseman John Aiello, who possesses the kind of power that makes one imagine he could hit a ball right over that hill beyond the outfield wall. If you want to see him in a couple of years you’ll have to travel to Toronto and pay way more for the privilege of doing so. It’s always better to catch the stars on their way up.

After a great night’s sleep and a wonderful breakfast of buckwheat pancakes and bacon at the Bluefield Inn, I headed home, going back to work as a writer who covers major league baseball for a living. As I write this now, however, my mind is still drifting back to minor league baseball and all of the hospitality, beauty and baseball enjoyment I experienced on my trip to in Princeton, Beckley and Bluefield. It’s a trip I’ll most certainly make again and which I hope you get a chance to make soon yourself.